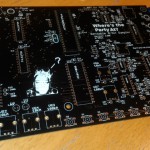 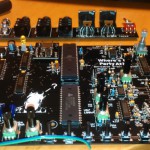 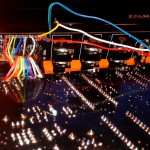 Connecting the I/O board 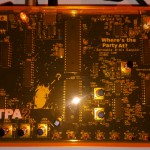 WTPA2 (short for Where’s The Party At v2) is the baby of this simpatico guy named Todd Bailey.

WTPA2 is a precise and weird 8-bit audio sampler kit – hackable & open sourced – which does some stuff that no other samplers out there do. Beside basic sampler functions like: recording, overdub, start/end/duration editing, backward/timestretch playback it has some more advanced functions like bitrate depth, realtime feedback looping, granularity settings, output sum mode (which lets you combine both of the sample banks in any way you want).
Samples can be saved and loaded from a micro-SD card or, if live sampling is used, into it’s 512k memory.
It has separate analog clocks for the two SRAM sample banks, allowing live samples to be pitched independently. Also, up to three independent voices can be played at a time and each can be controlled by seperate MIDI channels.
The sampler also has a CV-in that can make it play along with your modular or the like.

The easy to build basic kit (without extensions or case) is 90$ and can be obtained here.

This site uses Akismet to reduce spam. Learn how your comment data is processed.